The German citizens of Constance today are proud of their role in history. The great “Papal Schism” (1378 – 1417) where three popes ruled the Christian world at the same time – each claiming the other was the ‘anti-christ’ – needed straightening out. There are memorials in the city today of three-headed peacocks wearing papal ‘mitres’ that mock the absurdity of this situation six hundred years ago. 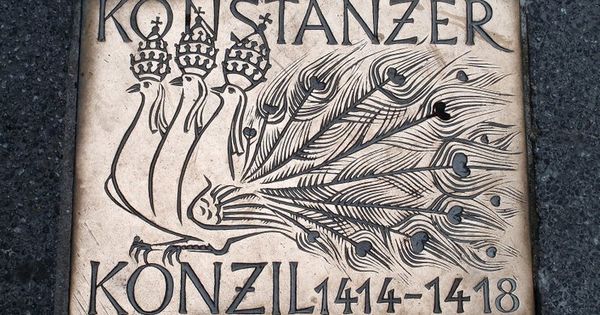 And so, the Council of Constance (1414 – 1418) not only found time to resolve this significant problem of having three popes at once, the collected clergy from around Europe also found time to burn some people at the stake.

One of the first to be condemned was John Wycliffe. Wycliffe was a theologian and professor at Oxford University in England who’d spoken publicly about the Bible being the supreme authority when it came to the affairs of men. He also had the temerity to translate scripture from Latin into English so more people could read it. For this the Council of Constance condemned him as a heretic and the judgment was he should be burned at the stake. Fortunately for John Wycliffe he’d already been dead thirty years. But, the Council’s judgment must be obeyed and so the bones of Wycliffe were dug up, burned, and his ashes thrown into a nearby river.

A month after the Council’s condemnation of John Wycliffe the trial of John Huss began. John had been invited to Constance from the city of Prague where he ran the esteemed Charles University there. Huss had not only read Wycliffe’s writings but had them translated into the Czech language for his students to read. John Huss had also spoken out against the church’s selling of “indulgences” – an increasingly popular money-raising method where the church would take exorbitant payment from both rich and poor by promising to shorten the suffering an individual would experience in Purgatory when they die. The professor from Prague saw this for what it was – a spiritual shakedown – and he said so publicly.

King Sigismund of Hungary wanted to hear more from Huss on these matters and invited him to the Council of Constance to speak. The king promised John Huss safe passage from Bohemia to Germany, and John’s mistake was to believe this promise would be honoured. In Constance, he was arrested, found guilty, tied to a pole, and set on fire. Just like his mentor Wycliffe, Huss’s ashes were also thrown into a river.

It’s been observed by historians that the church’s attempts to supress criticism through the burning of Wycliffe, Huss and other “pre-Reformers” ironically served to fuel the flames of a much wider movement. It would take a hundred years, but it was almost as if the rivers these men’s ashes were thrown into would slowly take their spiritual message to other lands and then across oceans.

The Reformation of the church that would shake Europe and the Christian world was only just beginning.